William Shakespeare famously wrote, “All the world’s a stage.” If he had ever visited Sioux Falls, he may have said, “All of Sioux Falls is a stage.” Because everywhere you turn in the city, there is a concert, gallery, parade, or some other event to entertain you and your family

William Shakespeare famously wrote, “All the world’s a stage.” If he had ever visited Sioux Falls, he may have said, “All of Sioux Falls is a stage.” Because everywhere you turn in the city, there is a concert, gallery, parade, or some other event to entertain you and your family—and it goes way beyond theater. When you rent or buy a home in Sioux Falls, you’ll never be bored because there is always something to do, no matter the season.

Summertime, and the livin’ is easy—and so much fun—thanks to summer concert tours and outdoor shows. Sioux Falls is home to the Denny Sanford Premier Center, where the entertainment options are endless. National concert acts, such as Backstreet Boys and Thomas Rhett, are just a few of the acts that have recently graced the stage.

In addition to concerts, the Denny Sanford Premier Center hosts sporting events, circus acts, comedians, and bull riding shows throughout the year to keep you busy. The city also has smaller venues that bolster the Sioux Falls music scene, such as The District, which is a more intimate place to catch a local musician or an indie show.

When it’s warm outside, taking in a concert at Levitt at the Falls is a must. This venue, which focuses on building community through music, offers 50 free concerts all summer long at the Levitt Shell in Falls Park. The brand-new outdoor venue is family-friendly and a great place to gather with friends. Be sure to bring a chair, and then kick back, relax, and enjoy the show.

Falls Park is a destination of its own for Sioux Falls residents. In the summer, you can entertain yourself by looking at the outdoor sculptures, taking a spin on your bike down the bike path, or visiting the Farmer’s Market. In the winter, you can gaze in awe at the park’s holiday lighting displays.

When you move to Sioux Falls, you’ll realize there’s an event for every mood and for every temperature outside. Summer means it’s time for Hot Harley Nights, where riders and non-riders can partake in food, brews, and bikes. There’s also Downtown Riverfest, where you can experience bands, fireworks, and food trucks. As the leaves turn colors and the air gets crisper, you can enjoy the Sidewalk Arts Festival, which features local artists displaying their treasures at Washington Pavilion—also a great place to take in a theater performance!

If theater is your thing, the historic Orpheum Theater hosts plays, musicals, concerts, dance events, and more. If you prefer catching a movie, Sioux Falls has several movie theaters, including the State Theatre which is a refurbished historic building that focuses on indie and classic cinema.

During the winter months, you don’t have to worry about your entertainment options drying up in Sioux Falls. Locals enjoy the Parade of Lights downtown during the holiday season, along with the Sioux Empire Livestock Show in January. Show your green in March with the popular Saint Patrick’s Day parade, which fills the downtown streets with floats and festivities.

No matter the season, there are several art galleries to visit in Sioux Falls, including the Sioux Falls Sculpture Walk, the Museum of Visual Materials, and the Eastbank Art Gallery & Studio.

If your family is passionate about animals, the Great Plains Zoo and Delbridge Museum of Natural History is also located in the city, and it’s open year-round with a variety of creatures and displays.

Renting or buying in Sioux Falls is exhilarating, because you’ll never run out of things to do. All of Sioux Falls is a stage where you can find your next slice of excitement.

When you move to Sioux Falls, you’ll realize there’s an event for every mood and for every temperature outside.

This Instagram-worthy list features DTSF patios with great views or an artistic twist. If you like to share stand-out pictures of your culinary adventures on social media, these patios are a must! 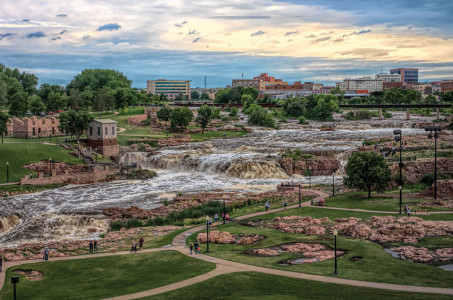 The Best Ice Cream in the Central & Northern Black Hills

On a warm summer or fall day, there’s one thing that always hits the spot: ice cream. Luckily, the Black Hills has plenty of scrumptious ice cream shops to satisfy your sweet tooths.